“ The key to success is to listen to the customers (objectives, priorities…), understand what they do, visit their facilities and compressor room. With all this information you can then provide the customer with the best possible and sustainable solution for their needs to make them more competitive than their competitors. ” 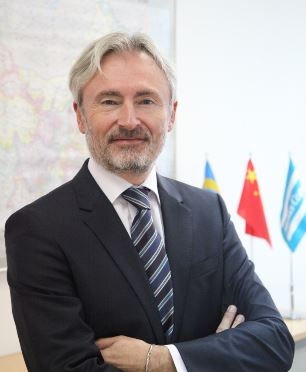 Francis Liekens joined the Atlas Copco Group in September 1994 as the production company controller of the Industrial Air Division in Airpower. Three years later, he became the Financial Manager of Compresseurs Worthington Creyssensac S.A. (France), one of the first “Multi Brand” acquisitions of Compressor Technique.

After having worked for nearly 10 years within the Atlas Copco Group in Europe, he moved to Asia as Regional Business Controller for South-East Asia.

Based in Singapore, he spent at least 50% of his time supporting the other Customer Centers within the region, mainly Indonesia, where he was very much involved in reviewing the procedures, (re)organizing and improving the quality of reporting and supporting the local Business Controller.

On April 1st, 2007, he started a new mission in France as Business Controller Multibrands Industrial Air, which also included HR responsible for the legal companies Compresseurs Worthington Creyssensac and Mauguière. Eventually he became the General Manager for Multibrand France in April 2009.

From 29 October 2014, he moved back to Asia as General Manager for Compressor Technique Malaysia and Singapore customer center. In his new role starting from August 2016, Francis oversees Atlas Copco’s operations in Greater China and Mongolia, with more than 40 legal entities.

Interview with Francis Liekens
1. What is your first impression when you came to China?

From a personal point of view, I can say that I had some "old" impressions of China in my mind from television, books and my previous visits to China, mainly Wuxi and Shanghai. So when I arrived for the first time in Shanghai, I was really surprised to find such a modern city, full of vigor and speed! Also the Atlas Copco colleagues I have met here are very nice, professional and helpful. This is a real big support because as in many countries in the world also in China, you have a heavy administration regarding visa, work permits, insurance, etc., so you need help to find your way and do the right things.

I've visited our operations in Wuxi , Nanjing and a few customer centers in Shanghai also. You can feel our fantastic culture and enthusiasm in every company. From a professional point of view I will need to understand and study the culture of each country that falls under the Holding responsibility. This is important to respect your colleagues or partners, whether they are government, local or national authority or business partners. It will help to understand how business is done. One of the efforts I will need to make is to learn a minimum of Chinese.

Let's see how that will go.

2. What are the main challenges and opportunities Atlas Copco is facing in Chinese market？

The growth pace of the Chinese economy remains low for Chinese standards. Actually we should start to get used to this "new normal" of single digit growth. You can also see a transformation in the economic model from a production driven to a more consumer driven market as a result of the increasing purchase power of the middle class.

Another trend is the fast pace development of digitalization in businesses which China is actually leading. Alibaba, Didi, WeChat, and so many more apps are available to the millions of internet users on smart phone, tablets and other means. We need to jump on this train, grasp and create opportunities for Atlas Copco.

The last evolution I have noticed is that the local competition is sharpening and offering innovative low cost solutions. This results in China exporting high tech and advanced products to the rest of the world. If you want to succeed in China, you need to be lean, cost efficient, agile, and fast. I think we are doing the right things in China, but in Atlas Copco we believe that there is always a better way. There are always challenges in front of us, but on the other side, I see many more opportunities for sustainable profitable growth in China.

3. Compared with the market of other Asia countries, how diverse is China?

China is the second biggest economy in the world. Experts foresee that China will pass the USA to become the biggest economy in 2030. The other Asian countries are also developing, but are not at the same level as China. Despite the dependency of the China economy (growth), we see good growth in South East Asia. India is now growing at double digit figures, very impressive. So you can see that also the other surrounding countries are not sitting still and will give China a challenge. But you can see more initiatives in China. It's going faster than anywhere.