Even though the Saarland-based manufacturer had positive experiences using pneumatic tools in the assembly of its high-quality frying pans and cooking pots for many years, it has switched to electric screwdrivers. At Norbert Woll GmbH, handles and grips are screwed in more precisely, more quietly and more cost-effectively with these electric screwdrivers than with their pneumatic predecessors.

Norbert Woll GmbH has been producing frying pans and cooking pots at its headquarters in Saarbrücken since 1979. In recent years, demand has risen considerably for the Saarland family company. “The international boom in TV cooking programmes is continuing and our presence in TV shopping and online is contributing to the success of our topclass products”, reported commercial manager, Sascha Kappelmeier. Manufacturing in Saarbrücken is bursting at the seams thanks to the rising production figures. “For that reason, we have constructed a completely new factory in Saarwellingen, around 30 kilometres away.” The new location is specialised in the production of professional cast aluminium pans – covering all stages of production from casting and coating, base processing and assembly through to packaging. The line was designed with a focus on short processes and a high degree of energy efficiency.

“We made a conscious decision not to relocate to a low-wage economy, but rather to achieve cost benefits through more effective production”, explained Sascha appelmeier. He is leading the reduction in compressed air consumption, for example. Even though for decades the company achieved good results assembling frying pan and pot handles using pneumatic screwdrivers, with order numbers reaching nearly a million pots and pans per year, this method of assembly makes a considerable difference, not least financially. “As a driving medium, air is relatively expensive”, explained the businessman “and in our new factory, we intended to use production methods with a much lower energy consumption. So we asked our tool supplier Indruba about alternatives to the technology we previously used.” To appelmeier’s surprise, the Indruba team put together a whole solution package. This promised not only a dramatic reduction in energy consumption; it was also convincing because of the improved ergonomics and precision in assembly brought about by the new equipment.

The connection between the pan and the handle must hold reliably, this is a core quality feature for the Saarland manufacturer. “We use a special brassthreaded nozzle cast into the base of the handle and M5 cross-recess stainless steel screws with extended slots to ensure perfect traction when joining.” Initially, Woll apparently considered a fully automatic system for screwing in the handles, but this could not be implemented due to the extremely high costs and the extensive variety of products. In contrast, the flexible Atlas Copco equipment recommended by Indruba worked with the many varieties of Woll pan models straight away. Instead of a compressed air network, it requires only a 230 Volt plug socket, and fully meets all assembly requirements with just three components. An EBL electronic screwdriver is clamped in a torque arm, which, through combination with an RIL Balancer, is suspended almost weightlessly. If the operator reaches for the screwdriver, they can guide the tool precisely to the screw location without any disruptive resistance. The thrust starter integrated into the EBL lowvoltage screwdriver automatically starts off the screwing cycle. All reactive torque is absorbed by the SML torque arm, without burdening the operator. “There is no comparison to before with the hand-held compressed air tools. With those, even after the end of the working day your wrist would tingle, and it was a lot louder too," workers reported. Alongside the improved ergonomics, Sascha Bauer also praised the repeat precision of the four EBL tools used in this station.

We have not had any unplanned downtime since they were commissioned, after a good two million screwing cycle. Our operating experience has been entirely positive. 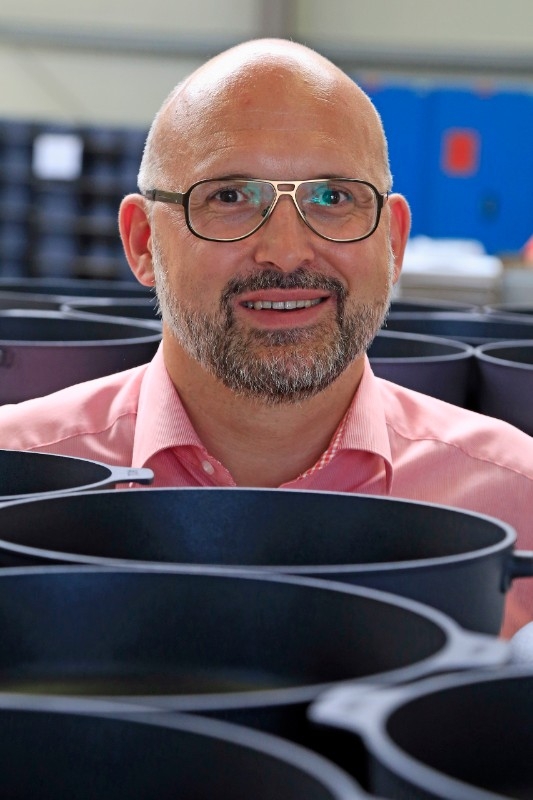 “Compared to compressed air screwdrivers, we save a good 80 percent in electricity.” Random samples would prove that, thanks to the torque precision shut-off clutch, screw connections at Woll are also even more precise than with the old compressed air tools, which were already good. The EBLs have long proven their stability, with a strength of 1 to 5.5 Nm and speed of 600 rpm, and brushless low-wear motors. “We have not had any unplanned downtimes since they were commissioned, after a good two million screwing cycles”, said Kappelmeier. “And for each screwdriver, 2500 tightening processes are added per shift...” Using the EBL simply pays off for the company, concluded a satisfied Sascha Kappelmeier: “Our operating experience has been entirely positive.” That is why, in June, the assembly workstations in the main plant in Saarbrücken also switched to these quiet and reliable low-voltage screwdrivers from Atlas Copco Tools.