If Tesla has a mission to accelerate the world’s transition to sustainable transportation, Atlas Copco’s mission is to secure an efficient assembly line for the electric cars. Any critical threaded fastener in a Tesla vehicle is installed with Atlas Copco tooling.

Tesla is not like most other American car manufacturers. First, it only produces electric cars. Second, these electric cars are not manufactured in or around the motor city of Detroit, where the traditional Big Three – Ford, Chrysler and General Motors – are based. The environmentally friendly newcomer is born and bred in Silicon Valley in the US.

A look at the chassis reveals even more differences. Unlike a traditional­ gasoline combustion engine with ­hundreds of moving parts, the electric motors­ in Tesla vehicles only have one, the rotor. As a result,­ the acceleration is instantaneous.

The Ludicrous Mode makes the Model S one of the fastest sedans in the market, going from zero to 60 miles per hour in 2.8 seconds. 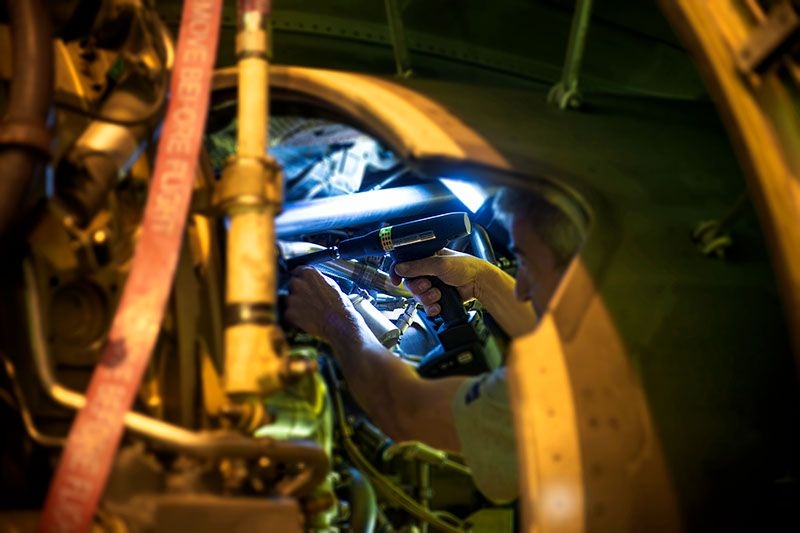 Jagat has been working with Tesla since the launch of the flagship Model S in 2012, which has an official range of 426 kilometers in the 85-kilowatt-hour battery pack.

California has little experience with car manufacturing. In technology-dominated Silicon Valley, knowledge of car assembly was limited, he says, which meant that Tesla strictly relied on Atlas Copco as a strategic partner for un­derstanding assembly. When the Model S was launched, Atlas Copco was a key supplier of fastening tools for the vehicle.
“I joined when Tesla was at the start-up phase of their manufacturing process, and support was key to success,” Jagat says.

While working closely together to create an efficient and smooth assembly line, Jagat soon proved that the Atlas Copco assembly tools were more reliable than competing models. Since 2014 ­Atlas Copco has delivered 100% of the critical joint tools used in assembly and more than 90% of all non-critical fasteners. Some 85% of the factory uses the Atlas Copco STB Battery series of tooling. Today there are eight Atlas Copco service engineers on site to make sure the tools run smoothly in every step of the production process.

As there is no combustion engine, our tools are used to assemble all drive units and all electronics that go into the ­vehicle, from the 17-inch touchscreen to the wheels that keep the S on the road, not to mention all circuit board connectors and for testing of all joints in the lab.

In the motor vehicle industry, highly sophisticated electric tools are used for all class A-joints to control quality. An A-joint failure can affect the driver as well as other people or other vehicles surrounding the car if they come apart, so the highest quality levels are needed.

“There are more than 200 critical joints that go into a car, and we ensure 100% traceability on all of them,” Jagat says. “Information such as torque, angle and result as well as date and time stamps from all of our tooling systems are stored on our toolsNET system on all joints made by our Power Focus and Power­Macs systems branding tools.”

Tesla has plans to increase the current delivery of Model S and Model X vehicles as well as to introduce a new vehicle intended to have a broader appeal for the general public.

Tesla Motors was founded in 2003 by a group of engineers in Silicon Valley, in the US, who wanted to prove that electric cars could be better than gasoline-powered cars. The Tesla Roadster was the first fully electric sports car, and 2 400 roadsters were produced between 2008 and 2012. Model S, the world’s first electric sedan, was launched in 2012. Its flat battery pack is integrated into the chassis and sits below the occupant cabin, giving the car a low center of gravity that enables good road holding and handling while driving 426 kilometers per charge. Model S has been followed by Model X, a crossover sport utility vehicle.